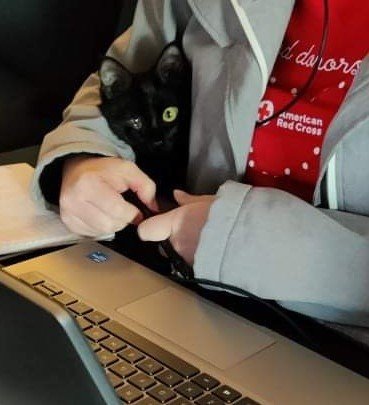 Teddy is a little-floofer with a lot of love and affection to give. It took him a solid 2 months to come out of his shell. Although now as Teddy’s sister Molly has gone to a fur-ever home he’s opening up even more!

He used to only meow when it was time to eat, and even then, his timid-little scowl was short and sweet. But now he has a meow for needing pets and attention! He’s a true lap-cat in the making, especially on the couch, or trying to do work at the dining table. He’ll let you know that he needs space to jump up so he can sit and purr.

Teddy is skittish at first, needing patience as he comes to trust you. His appetite is king and petting him is no problem while he is feeding! A few days of treats, regular mealtimes, and patience and you’ll have a heart-warming companion. He can sometimes be easily startled though, and he will hiss at you and bolt away! But that’s because he’s just a big scaredy-cat. He doesn’t bite or scratch and overall has a very chill demeanor. Having guests over is not a time for him to run and hide as it has been proven time and time again, that it’s a good time to get treats! Even from 4yo nephews. (Teddy is not bomb-proof though)

Teddy is soft like a bunny – and absolutely adores having his cheeks and head scratched – the purring rumble start and turn into thunder when petting begins and he settles in! He’s become quite the little lovebug, demanding attention when he wants it! If you’re working at home, this is a definite plus. When on the couch with his foster mom - he will headbutt her arm until she lifts it so he can crawl onto her lap and chill. He is fine being introduced to other cats (Not sure about dogs, and children will need to be extremely patient with him)

He has a wonky eye for which he saw the eye specialist, but it was found to be a congenital abnormality. He has full sight in that eye! We think there may be some reduced field of vision, as he can be startled sometimes.

This little man is absolutely a lover wanting to be petted and loved in his forever home!

To Adopt one of our Cats or Kittens,
please fill out an Online Adoption Application on our website
https://www.13thstcats.org/info/adoption

If the animal bio says that they are a "Courtesy Listing",
the contact information will be included in the animal bio for you to reach out to them directly.

Thank you for wanting to Adopt!

We try our best to match our cats to the perfect homes, and match them based on their personalities, not their looks. Adoptions are not done on a first come, first serve basis, rather in the order of what homes are the right match for that particular cat

Other Pictures of teddy-V (click to see larger version):