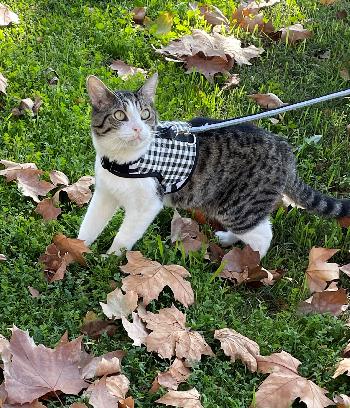 fievel
Fievel died on Christmas eve day-2021. He came to us from the san martin shelter with horrible kidney failure which could never be controlled. He was a champ at taking his nightly fluids but refused any prescription diet or supplements. He loved his treats; meow mix; his water fountains; his garage buddies and his on-leash walks. He stole all of our hearts with his leaps onto our shoulders from the ground where he would stay perched until we asked him to get off. He was an incredibly special guy-- an old soul-- and pure sweetness. We will miss him so much!! He has touched all those that knew him. 2/7/14-12/24/21 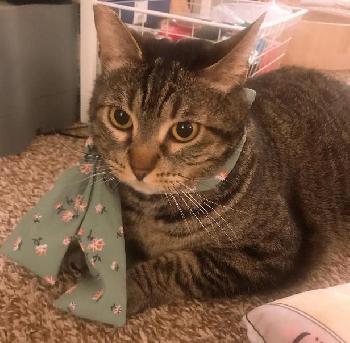 Tiffany
Tiffany was rescued from San Jose Shelter when she was 6 month old left in a box with a friend. Tiffany was FELV positive and was lucky enough to find her forever home with Roro, who loved her unconditionally for all her too short life, a better home no cat could ask for. Here is Roro's tribute to this special cat: Tiffany was a peaceful, lovely, and independent girl who had been fighting FeLV her whole life! In spite of the vet’s diagnosis, she strove to live her life long and prosperous. She may not look like such, but she’s definitely a foodie at heart; she would peek at you for hours just to remind you it’s time to eat. Canned Tuna and greenies were her all time favorites. When she was not curling in her cozy bed or chasing the sunlight reflection, she would be lying right next to the balcony doors and enjoying her sun bath. She may seem shy and usually hid in my room when there were visitors, but she was actually quite friendly. She’d wander around you asking for petting on her butt. Whenever I forgot to close the balcony doors, she’d love to stroll the adjacent balconies and say hi to our neighbors. She then developed a hobby of patrolling my desk, videobombing my meetings, and greeting my coworkers ever since the quarantine. Tiffany was also very smart. She learned “stay” and “hand” in a week and never forget! Even though she had her own chariot that I used to take her out to places like Rose Garden and my workplace, she’d still prefer to stay home most of the time being a bed potato. She liked to sleep in the center of my bed and snored loudly at midnight, leaving me wondering how I was supposed to squeeze in the tiny space in her funny sleep. I miss her every single night now that I have all the space to myself. I dearly miss her snoring and sleeping face very, very much. Her company in the past 4.5 years was irreplaceable. Some may consider Tiffany long-lived for being a FeLV cat, but our time together was never long enough. I will always miss you, my little furry princess. 7/1/2015 - 7/2/2021 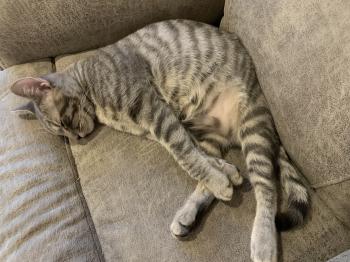 
Tigger was pulled from San Jose Animal Care Center at two weeks old along with his siblings. All of them had a severe case of upper respiratory infection. Despite the best veterinary treatment and a dedicated foster, we lost one to pneumonia within a few days. After a lot of intense supportive care by a dedicated foster, Tigger and his brothers pulled through. Tigger constantly had a runny nose or nasal congestion though while his brothers went on to get all the way better. After multiple trips to the internist, a cat scan and rhinoscopy, we figured out Tigger had a severely deviated septum and narrowing in his nasal passages. UC Davis and Sage said they could not help him so we were consulting with a hospital in New York City to see if they could help. Tigger needed multiple medications and twice daily nebulizer treatments to try to prevent further sinus infections. He was such a good boy for all his medications and treatments. He was very active and happy despite his sinus problems. He was the light and life of 13th Street Cat get togethers at his foster moms home. He also enjoyed crashing his foster moms dungeons and dragons game by jumping on the table and knocking all the miniature figures they were using to play on the floor! All of a sudden, Tigger started vomiting. After staying in the hospital a few days, it was determined he could no longer digest food and his gi system completely stopped functioning. Tigger was not responding to any treatment to restart his gi system and was going septic. Unfortunately there was no more to be done for him and despite our best efforts, we lost him. Tigger had one of the biggest personalities we’ve ever seen in a cat. He had no concept of personal space. He would sit on your chest, purr, and rub his happy drool on your chin. He would use his cuteness to wrap you around his little paw to get his way. This is the kitten that refused to wean until he was 8 weeks old and then would only eat wet food out of a dish on his foster moms lap. The wet food had to be warmed up first of course, even as he got older. He was truly loved and very much missed. The brightest stars 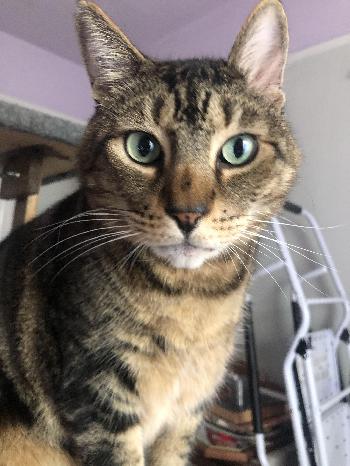 SImon
Simon was a much-beloved foster at 13th St. Cats. When we rescued him from a busy parking lot he was near-death...his diabetes was raging out of control, and he was on his 9th life. Hurting and in great pain, he struck out angrily at anyone who attempted to handle him...and since he needed insulin twice a day, his caretakers at 13th St. Cats received many many well-timed scratches! However, we saw something special in this fiercely protective gray tabby, and over time, as we brought his diabetes (and underlying bowel disease) under control as best we could, he gradually saw our wonderful volunteers as friends, not enemies. He became a loving, very chatty cat (who could still give a swipe or two now and again to keep us on our toes!) who had a host of cheerleaders who adored him. Simon's purr was something to hear--you could actually feel it from the other side of the room. He just loved getting attention, and thanks to his squadron of fans (i.e., loving volunteers) he lived the best life we could give him until we sadly lost him to his diseases. His foster knows he is in kitty heaven now, happily bossing angel attendants around... and while we miss him terribly, we are content he is without pain and will never have another needle poking him. 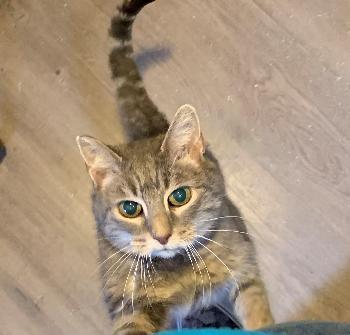 marcie
Marcie was dropped off in a cardboard box outside the cat hospital in campbell. They called our rescue to see if we could take in a friendly, young cat. When we got her- Marcie turned out to be just the opposite. She was older-- and very cranky!!! She wanted nothing to do with people for the longest time- hiding in her enclosure and swatting anyone who came near. It took a few months but suddenly- overnight- there was a huge change. She accepted pets and loved her treats. She had a loud, gruff meow -- sounded like she had been a chain smoker her entire life. She started calling out as soon as the door opened and she did not let up. She had all of us volunteers wrapped around her paw. ---- she was very loved and very spoiled. We all called her the queen. One day, her eye had some blood on it and she started getting meds for high BP. She was doing well but one day she had less energy but was still up for treats. That afternoon- we found her on the floor of her room and she was gone. She has left a large void in our hearts-- she was one of a kind and we will miss her always