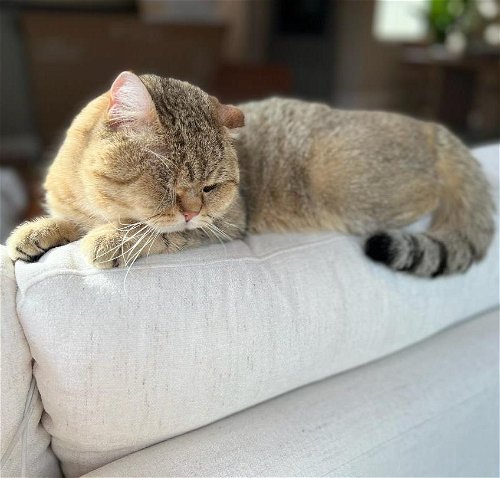 He is a special boy and need funding!
Grand Vinnie is a sweet rescue (Munchkin like look st those short legs).  He was found by a good samaritan hunkered down near a building in January, scared and cold, he is nothing but a gentle boy, who deserves the best we can do for him, though apparantly his original home didn't think that way.  This boy is a loving cat who still enjoys playing and being with the foster home no matter if all this has been his lot!
As the foster home alludes to he has been quite the "trainwreck" - so many things wrong with him.
He's got glaucoma and finally had to remove one eye, with continued treatment of the other, had ringworm (and seizures due to allergy to ringworm medicine!), He's got a damaged ear (likely injury), we've also had to treat for earmites (prior time also might have caused ear damage), and UTIs.
And NOW he has to have a double FHO to cure hip issues as he has bone on bone contact for both rear joints. Oh and did I mention he's cryptorchid, we'll do that neuter at the same time.
This is all quite an expensive boy of age unknown!  But it is what we do in rescue!  And he is a good patient which is really helpful also with all we've had to do!
Please help us out with this surgery its likely to run to 5K, and we have over 4K already into his care, this is tapping resources of course.

Good with Dogs, Good with Cats

To Adopt one of our Cats or Kittens,
please fill out an Online Adoption Application on our website
https://www.13thstcats.org/info/adoption

If the animal bio says that they are a "Courtesy Listing",
the contact information will be included in the animal bio for you to reach out to them directly.

Thank you for wanting to Adopt!

We try our best to match our cats to the perfect homes, and match them based on their personalities, not their looks. Adoptions are not done on a first come, first serve basis, rather in the order of what homes are the right match for that particular cat

Other Pictures of Grand Vinnie (click to see larger version):