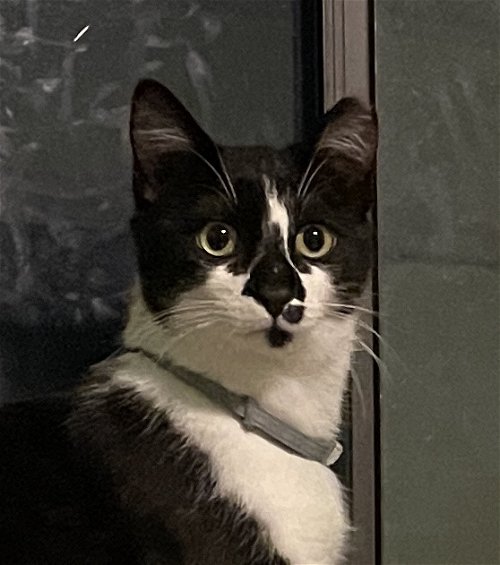 Please Note: This animal is listed as a courtesy to another organization. Please be sure to contact the foster/caretaker for more information about him.

Likes other cats, would like to be adopted with Whisker his sister

Velcro is a kitten out of a feral born litter I have caught in order to catch their yet to be spayed mother. With another litter on the way I am looking for indoor homes for these cats. They get along well enough with their littermates, and have been introduced to my older cat, who is grumpy and does not like them very much, but they have managed not to offend her too much.

He is house friendly, just make sure he has cardboard to chew and appropriate scratching toys. As Velcro is very high energy, I would not recommend him to first time cat owners.

If Velcro is alone in a room he will call for his sisters. If a human is not present he likes to have another cat (possibly other species also acceptable), so it would be best if he was adopted with his sister, Whisker, or into a household with friendly cats. Twitch is not recommended to be adopted with Velcro as she prefers to be away from him if possible.

Velcro is named Velcro for a reason! He’s attached to his human at the hip, no matter what you are doing (this luckily includes sleeping). He wants cuddles every morning, and does not want to be put in his room for me to leave the house. Otherwise he is happy to be picked up any time.

Velcro would play with my younger niece and nephew (3 and 7) with appropriate cat toys prior to being brought inside full time. He would leave the area if they tried to pick him up. However, I think with time and socialization he would be accepting of children handling him carefully.

THIS animal listing is a COURTESY LISTING - not a 13th St Cat Rescue animal.
See information about whom to contact in bio THANK YOU

Other Pictures of Velcro (click to see larger version):