We were SO HONORED to be chosen by the club, Animal Allies at Silver Creek High School. @...

PAWspectives Writing Contest benefitting 13th Street Cat Rescue and Silicon Valley Pet Project. Submissions are being accepted from October 15, 2020 to November 15, 2020 and are limited to 500 words.
Learn how you can help here! https://sjwomansclub.org/pawspectives/

A big thanks to San Jose Woman's Club (SJWC) for their recent Charitable Giving Donation awarded in late 2019. We were so please to be selected by the San Jose Woman’s Club (SJWC) Board of Directors as one of the recipients of one of these donations to help support of our work in the community.  The SJWC has a long history of supporting organizations that engage in cultural, educational, community and charitable pursuits that complement the goals of their organization, and we are thankful for all their assistance to us and the community in general.

Are you an Amazon shopper?

You can donate for free every time you make a purchase! 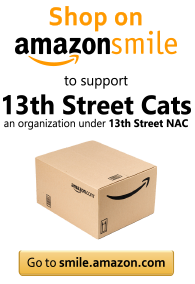 Troop 479.- chartered by the Cupertino Rotary club who also provided funding for the project

Looking for an easy way to help our homeless cats? We now have an Amazon Wish List filled with the things our fosters...

A huge thanks to Precious Cat for their donation of over 3,800 lbs of litter to 13th St Cats, March 2015!  Half the load is their Ultra Premium Multi-cat Scoopable and the other half their wonderful Cat Attract litter designed by their Veterinarian Dr. Elsey. 13th St Cats knows first hand the value of the Cat Attract litter, as it has in the past enabled successful retraining and the rehoming of over 3 dozen cats.   www.preciouscat.com

"FELINE GOOD: Judy Conner emailed me with last year's numbers for the 13th Street Cat Rescue, the downtown San Jose-based group powered entirely by volunteers since it was founded in 2005. In 2013, the group found homes for 222 stray cats, and were able to spay or neuter 233 cats. Still, there are plenty of cats downtown and elsewhere that seem to be roaming around without homes.

That's why the group is actively seeking foster home volunteers and will conduct workshops throughout this year. Go to www.13thstcats.org/info/index for more information.

Keep up to date with all the latest happenings with 13th St Cats and friends. Visit us on our facebook page! There's a link on our home page. >^.^<

13th Street Cats was a proud sponsor of the Luna Park Business Association’s Chalk Art Festival on October 10 at Backesto Park.Thanks to the Santa Barbara artists who created the cat art on our behalf!

13th St. Cats Will Be There!
Save the date: October 10, 2009 Backesto Park http://lunaparkbusiness.com/chalk.html

"What we've learned is that large black dogs, and also black cats, tend to be the last ones to get adopted from shelters," said Kim Saunders, the head of shelter outreach for Petfinder.com, a Web site often used by people looking to adopt pets.

"As a result, there are more of them in shelters and are euthanized more because of the lack of space," said Saunders, who says that one of the reasons she believes black dogs are overlooked is because they don't photograph as well as lighter-colored animals."

Please take a look at our adoptable black kitties.
Black Kitties Are Wonderful! >^,^<

Poor little Licorice has had more than her share of trying times. 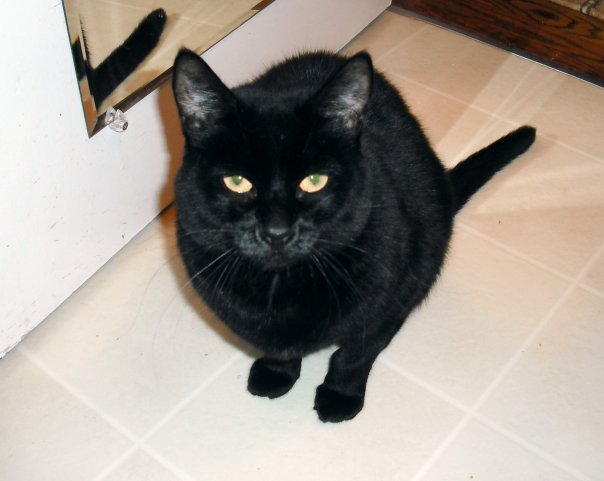 In 2007, a gentle and sweet black kitty named Licorice gave birth to six tiny kittens while at San Jose Animal Care & Services. The stress from being there proved to be too much for Licorice, and she wasn’t feeding her kittens. The shelter contacted rescuers, Janice and Dan, and they pulled Licorice and her babies from the shelter, brought them home and routed her babies to two foster homes specializing in bottle feeding. Sadly none of the babies survived past three weeks and all were buried together.

Licorice went on to be adopted later that summer.

Janice and Dan, now volunteering with 13th St. Cat Rescue, received a call that Licorice was surrendered to San Jose Animal Care & Services as a “stray”! Poor Licorice was back in the shelter, stressed and very scared.

Numerous attempts to contact her adopters failed; they did not want Licorice, she had been abandoned by the family that was supposed to love her and care for her.

Janice and Dan took her back into their home and after a week of acclimating and ensuring she was ok, she went to her original foster home where she could relax and be comfortable until she would find her new forever family.

About mid-July, her foster mom noticed a fairly large mass on Licorice’s rear left leg. Licorice was taken in for a biopsy and it turned out to be fibrosarcoma-cancer.

With fibrosarcomas there are 3 choices: 1) do nothing - very likely cat will die shortly as fibrosarcoma spreads rapidly 2) do radiation, but it’s only 80% effective and you’ll have wasted valuable time if it doesn't work or 3) remove the leg which, if you do it soon enough, is 100% effective.

Faced with these options, the decision was made to have Licorice’s leg removed on 8/2/09. She went through surgery just fine and a biopsy on the removed limb showed no cancer in the margins of the limb, so her prognosis is excellent.

Licorice’s foster home says she is managing well with her missing limb and is in good spirits. She has had quite a sad little life, and is incredibly sweet; she's lucky rescue was there for her, not only once, but twice. As Janice says “Licorice is sure working through those 9 lives!”

Thanks to 13th St. Cat Rescue and the continued efforts of volunteers like Janice and Dan, Licorice will be cared for in our foster program until a permanent home is found. 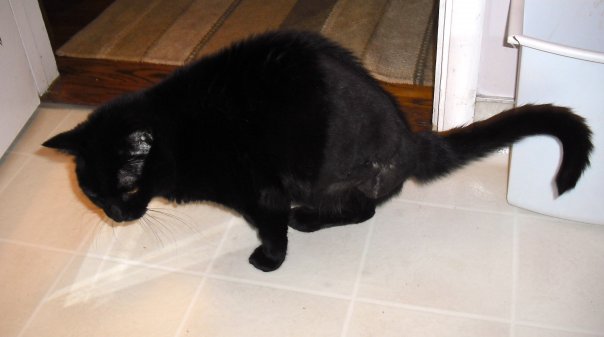 Licorice is available for adoption; if you would like to meet her please contact us at info@13thstcats.org.